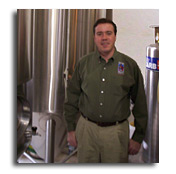 This is the fifth in a series of discussions with our roving brewing expert, Eric Watson. Episode 1 of The Roving Brewer caused quite a stir and brought up a number of questions. We are addressing those question in the next several episodes.

Q: In the previous article you said it is best to only aerate the starter if you are so equipped to do so. The reason is that once the yeast has all the oxygen it needs to build strong cell walls and reproduce, it does not need any more. Any additional oxygen beyond that point will cause them to stay in a reproductive state rather than begin a fermentative state. I need to clarify this, do you mean:

A: Not exactly... their aerobic phase is actually a lag phase before reproduction phase. They take in oxygen THEN they begin reproduction which, if there was not an excess of oxygen, begins the anaerobic phases.

A: No... they will only absorb enough oxygen oxygen to begin wall building.

Q:...if its 1), doesn't this go against all previous knowledge and experience regarding the crabtree effect which causes anaerobic fermenation even in the presence of oxygen?

A: If you delivered the correct amount of oxygen to the starter, there will be no oxygen left in solution within 20 minutes. This assumes good yeast health, of course! I routinely measured this occurance while studing brewing microbiology at Siebel. It is a great indicator of yeast vitality.

Once budding has begun, there will be a small amount of fermentation going on, but the wort should be anaerobic at this point. Until critical population is reached and they stop reproducing, logarithmic fermentation will not begin.


Q: What do you mean by logarithmic fermentation?

A: Logarithmic fermentation is when the yeast population attains their maximum ability to metabolize sugars. You can actually see this in a carboy or by observing your airlock bubbles. Visually it is when the surface of the wort is rocking quicky or, in an opaque fermenter, when the air bubbles are very fast... hardly a break between bubbles. It is also measurable by taking hydrometer or refractometer readings. When the daily readings are incrementing downwards evenly, they are in logarithmic fermentation. My average for ales strains is between 2.5 & 3.5 degrees plato and for lagers 1.5 & 2.5 degrees plato per day. This is strain, yeast viability and vitality, wort nutrition and temperature dependant.

Q: What is an appropriate mathematical model for yeast growth i.e., yeast population as a function of time. Are you aware of any? I have a suspect, logistical growth, but I would like to know what you think. Allow me to elaborate. I believe that strain, temperature, wort nutrition... will affect the overall shape of the graph of some mathematical model. What is that model?

A: Labs do statistical analysis to acquire empirical data about yeast performance. I would predict that a "modeling" system would not really be of much value since attempting to predict how an actual, not lab, fermentation would go would have too wide of a standard deviation to provide useful info.

The authority on ultra scientific brewing science is the ASBC (American Society of Brewing Chemists). They are the brewing industry equivalent of The American Medical Association and just like AMA publishes JAMA, a cutting edge research digest, ASBC publishes a journal as well. You may wish to pose this question to them at www.asbcnet.org. But... if they have something you want to get and you aren't a member, the price is steep.


Q: In a previous article you said that "The best practice otherwise is to step the yeast culture up one day at a time to 100 ml, 200 ml, 400 ml, 800 ml and finally to 1,000 ml (5 total days of stepping) using a 5 deg. plato hopped wort (remember you want REPRODUCTION not fermentation, this is why the wort gravity is low.) While doing this, aerate 24 hours a day (builds strong cell walls/keeps yeast in a reproductive state) using the air pump/sterile filter method. For a 5 gallon batch, this should be adequate. If you do this, there is absolutely no need to aerate the wort. In my case I use a stir plate and I have understood that this provides oxygen as well or better than aeration with a stone. Do you have an opinion on this?

A: Actually the only oxygen contribution would be from the headspace in the container. You should not be inviting air inward if it is sealed and airlocked. This is not enough air for yeast propagation. When you use an aquarium pump, filter and stone the air will only travel outward due to positive pressure which disallows air ingress protecting the wort from contamination. You should stir and aerate at the same time for maximum benefits.

Q: What is the advantage of stepping up for five days? I have been adding the yeast to my full amount - 1000 ml or 2000 ml. (then crash cooling to settle the yeast and using only the thick slurry)

A: In proper propagation you are using a very low gravity wort. The idea is propagation, not fermentation. The step ups are timed so that as the sugar is depleted they do not go into fermentation but rather are hung in the reproductive state when you add additional wort. The cells are volume sensitive so when the addition of another dose of low sugar wort is made they reproduce in relation to the new volume. This continues to occur if done properly and the starter is not allowed to go anaerobic. To get the proper pitching volume takes an average of 4-5 days with this method. If you pitch this volume of starter into your full volume beer wort there will only be a short lag until the onset of fermentation while they acclimate themselves to the new volume.

By simply allowing a full volume starter wort to reproduce, ferment and settle as you described does not yield the same results, the worst of which is a greatly diminished cell count. If they flocculate it means you allowed them to go through reproduction, fermentation and then dormancy. This will create a significant lag time over the proper method and will lengthen the time required to ferment to your target gravity.


Q: If using the stepping up process as you describe, would there be a disadvantage to crash cooling and using only the slurry?

A: Yes... this was partially answered above... by crash cooling you are forcing the cells into dormancy. This also reduces the viability or/and vitality of the cells as crashing them stresses them. The stress is additionally exacerbated since alcohol is present. The weaker cells with compromised cell walls can be destroyed in the presence of alcohol which is a solvent.


Q: In regard to Wort Aeration you said...If possible, don't! The reason is that it is not the wort that needs the oxygen, it is the yeast. By oxgenating the wort instead of the yeast starter, it will cause an over production of cells due to the excessive oxygen presence. This then leads to the production of unwanted esters and higher alcohols that will compromise beer flavor. Many texts on this topic have recommended otherwise. Even Dave Logsdon of Wyeast too advocated the aeration of wort in his Melbourne presentation last month.

However, I am more swayed towards yeast starter aeration rather than wort aeration for the reasons you have suggested, (and also because in an oxygen depleted environment yeast will begin anearobic fermentation rather than aerobic metabolism), but perhaps with one exception.......the brewing of high ester and phenol containing beers such as Weizens. If aeration of weizen wort maintains yeast in a reproductive state than this will increase ester and phenol production. And perhas a short aeration would be more appropriate so as to reduce diacetyl. A diacetyl rest would also reduce this.

Contrary to the literature, I also favourite the pitching of yeast AFTER Kraussen in all non-weizen wort, for the reason that yeast after kraussen is no longer in exponential growth. After Kraussen, yeast will have primed themselves with glycogen stores and other reserves, ready for anaerobic fermentation. For weizen worts however, Kraussen yeast would be more ideal to enhance ester and phenol production.

A: I agree that there is contrary info out there... I was also taught this at both Weihenstephan & Siebel. I agree that wort should be aerated when the volume is over 1 bbl. But in homebrew volumes, aeration of the wort is not as critical. If you do aerate wort, don't do it with pure O2 unless you have the ability to measure dissolved oxgen in solution. Aerate with an aquarium pump, sterile air filter and a stainless stone.

"Contrary to the literature, I also favourite the pitching of yeast AFTER Kraussen in all non-weizen wort, for the reason that yeast after kraussen is no longer in exponential growth. After Kraussen, yeast will have primed themselves with glycogen stores and other reserves, ready for anaerobic fermentation."

Actually the yeast produce glycogen for dormancy not fermentation. If you let them go that far you will be introducing a lag. You want to pitch the yeast pre-krausen. If the yeast is krausening (is that a word?) it is in a fermentation stage not a reproductive stage and the solution would be anaerobic.


"For weizen worts however, Kraussen yeast would be more ideal to enhance ester and phenol production."

Actually for that yeast strain it would not matter as increasing it's ester & phenol producing ability is more temperature dependant than anything else. Volume of pitch can also change that profile somewhat.